Recently, the way suggested edits were handled changed. No longer do I just happen upon that edit (1) link, click it, and hit approve or deny - there now needs to be two approve votes.

The problem is that after I hit approve, if I decide I want to do a further edit... I can't. The edit is pending, and clicking edit (1) just takes me back to a dialog which shows me the suggested edit and tells me I've approved it and it's waiting for one more person. There is nothing I can do at all until someone else comes along to approve the edit at all, because it's based on our review system which locks you into an action, and that doesn't work here.

Here's an example of what I mean. This is the pane I'm presented with after clicking the edit (1) link on a post for which I've approved a suggested edit. Notice the complete lack of any apparent way to further edit the post: 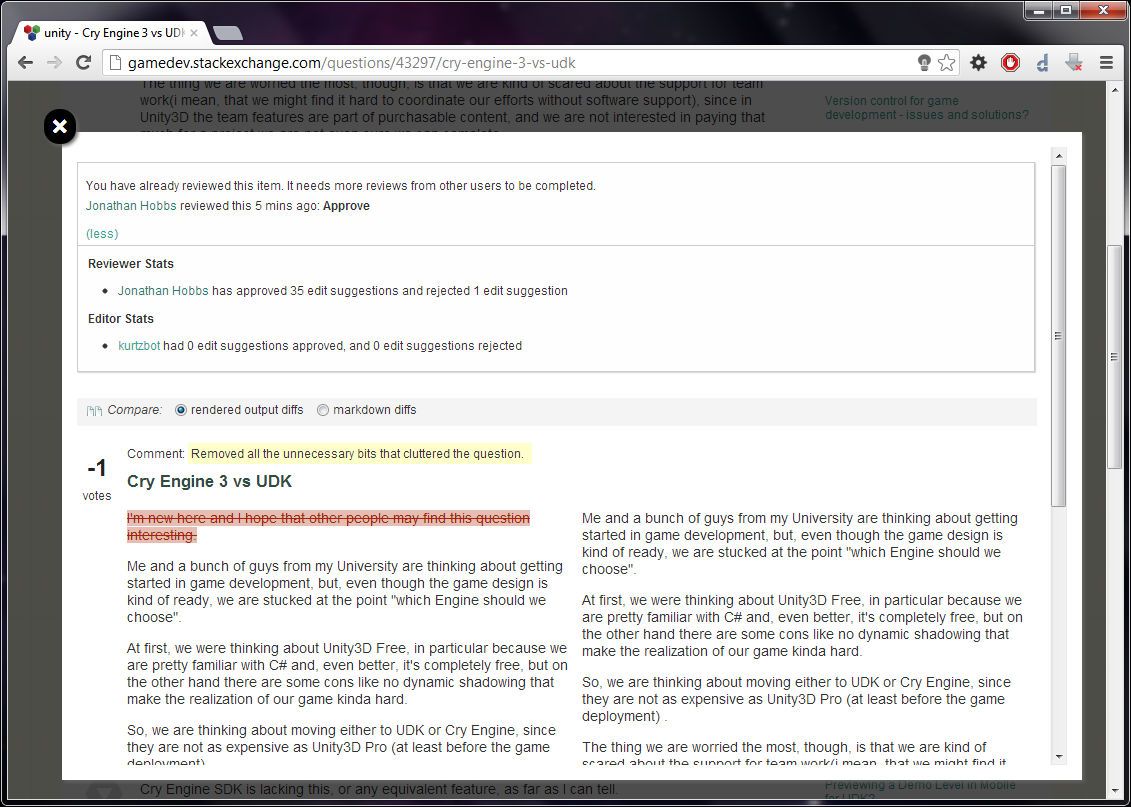 Actually, there is one thing I can do. I can go into the revisions for a question and hit the edit link for a prior version. This feels a bit hackish, because if I can still edit the question, I should be presented that option plain and simple without having to go this long way.

I was surprised to discover this when I was trying to edit this question: there was a suggested edit to remove "(XNA)" from the title, I approved it, then decided I wanted to modify the post further, and found I couldn't, discovering this entire situation. I glanced into revisions and found out I could edit it from there. The edit went through and the suggested edit disappeared (maybe because mine covered it) - and no credit was given in the revision log for the person who suggested it.

Please don't lock us out of editing whilst we're waiting for a suggested edit we've acted on to go through - at the very least because apparently we're not locked out of editing anyway.

1
Editing limits- disproportionate to impact of edit
6
Is there a shorthand version for posting links to other questions in a comment?
3
Why are the "edit" and "retag" links missing from this post?
10
Is editing a question to remove all content okay?
1
Should we make minor edits to correct mistakes?
5
How far is too far when it comes to editing questions?
6
Can this question be salvaged as "good subjective" with proper edits?
2
Can we please pay a little more attention to our edits, guys?
1
Why was my edit to this answer rolled back?