Should this very old question with many upvotes as well as upvoted answers be closed as "too broad"?

Fine question, lots of interest, but closed after 8 years as "too broad". Is that the right action?

Also, it did get edited recently, yet the editor fails to even correct a dead link where the OP posts a link to their discovered answer.

Also, it did get edited recently, yet the editor fails to even correct a dead link where the OP posts a link to their discovered answer.

Fortunately, you were there to save the day!

Jokes aside, edits are meant to improve a post; although "Tiny, trivial edits are discouraged", they're not forbidden. It often happens that someone edits a post for something specific and does not check everything. If we forced users to make posts perfect when they edit them, no edits would be made.

Thanks for fixing that dead link!

I'll try to address your other concern:

Fine question, lots of interest, but closed after 8 years as "too broad". Is that the right action?

I think the moderator opinion means very little given the votes. It’s what the customer buys sometimes, not what you want to sell.

We have many fine, interesting and useful questions on the site. This is shown by the score of a question (the 'up arrow' hover message is exactly that, "This question shows research effort; it is useful and clear").

However, the score of a question is not related to it being on- or off-topic. When a question hits the Hot Network Questions list, and it gathers a lot of votes, it does not make it "super on-topic", it only makes it "super interesting".

The 'on-' and 'off-topicness' of a question is guided by what is defined in the Help Center, and also from the discussions that happen here, on Meta.

Rules regarding the score of a question don't really change over time, and the score of a question tends to only go in one direction, unlike what's on-topic for a site, which will change a bit more over time. What was OK to ask 5, 6, 7 years ago may have been considered too broad, or not very good, for the site a some point later in time. When that happens, we don't go back and review all the (45k+) questions to see if they're still a good match for the site. We close them as we notice them. This can be done by one person (a mod) or by 5 users.

The question you're referring to here has been closed as "too broad". I agree that the line between "OK broad" and "too broad" can be hard to trace. If one thinks a question has been closed but shouldn't have, one can leave a comment and vote to reopen it (the question will be sent to the Reopen Votes queue for others to review), or one can create a meta post about it, a bit like what you did here.

If you think we should review what "too broad" means, again, a meta post here is the way to go.

I played a bit in SEDE, and dug up data about the time between when a question is asked and when it is closed. 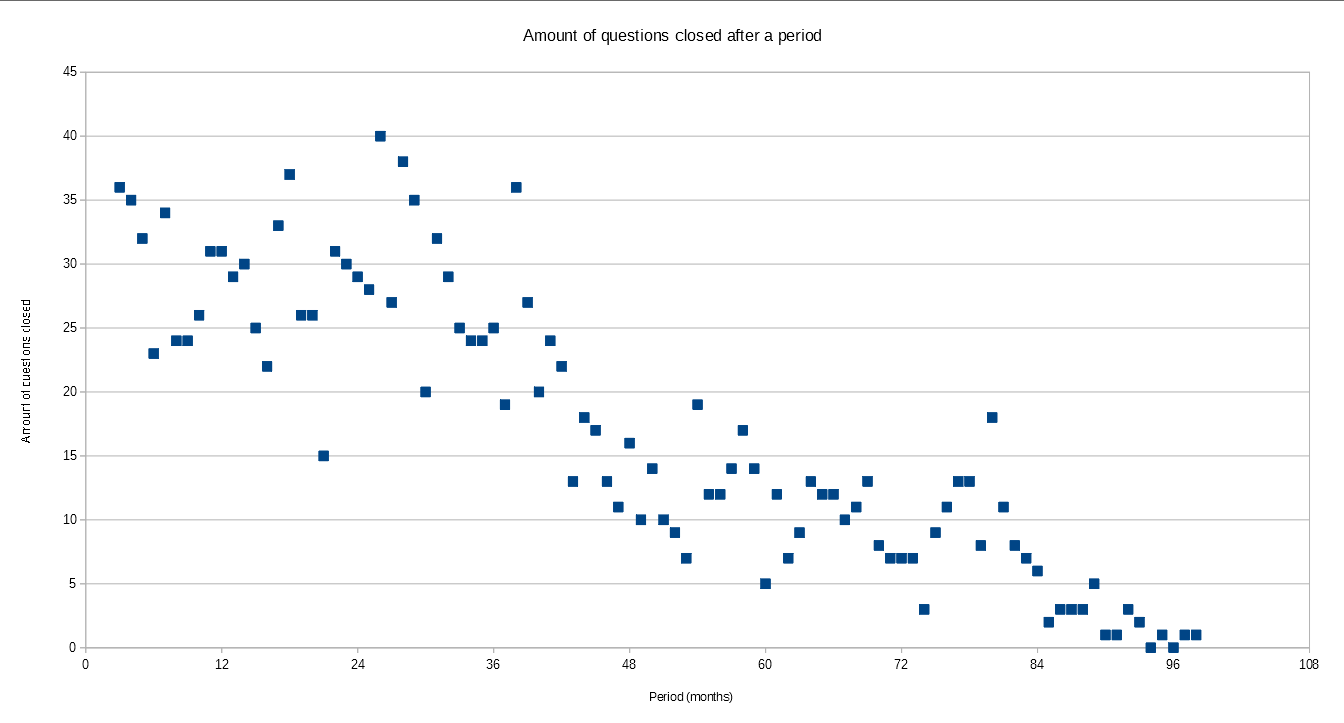 I removed days 1, 2 and 3 because they were outliers w.r.t. the rest of the data. We can see that closing a question a long time after it's been asked is not uncommon.

Not the answer you're looking for? Browse other questions tagged discussion moderation .

16
Why should 'How was the technique in X done' be considered off-topic?
3
What should be done with a closed question in which the answers have become out-of-date?