Why was my edit to this answer rolled back?

The question in question:

Why am I unable to edit the Input Field object's script? 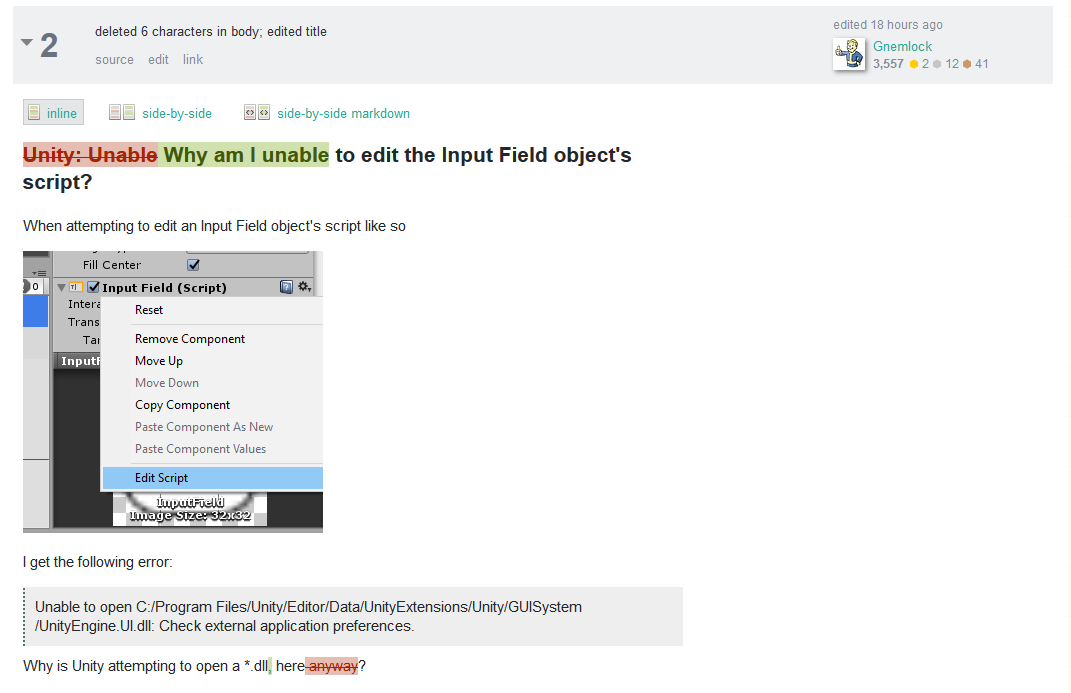 2) I edited the answer I planned on accepting, because I found additional relevant information, which completed the answer:

Note that this edit was accepted. This is also very much in line with accepted etiquette for when answers should be edited: Why can any user edit any other user's question or answer?, and something I am used to doing on other Stack Exchanges.

However, this edit of mine was rolled-back (to a state where I would not fully accept the answer any more), and the following comment was left by the editor responsible:

Except that the edit I made was not much of an alternative, it simply notes that the source code for Unity's UI Engine is officially available. The editor made further edits to the answer which were trivial comma additions.

My immediate reaction was to simply delete my gamedev.stackexchange account and move on, rather than deal with this annoyance, but I have decided to take out the time to put together something more comprehensive to the meta community, in case I am in the wrong. Please advise.

This edit was standard protocol: we discourage writing tags in titles. That means a title of "How do I foo?" is preferable to "Unity: How do I foo?" when the question is also tagged unity. An edit to remove that single word from the title is fine, and the user removed another superfluous word while they were in there (which is also fine).

2) I edited the answer I planned on accepting, because I found additional relevant information, which completed the answer [and then the same editor criticised the decision]

Ok, that's reasonable to object to, but it doesn't indicate a power trip. It's also standard protocol to be wary around other editors adding content to others' posts, though this looked to be a pretty reasonable circumstance to add new content and a good edit.

All of us in the community can get tired, not check something properly, misinterpret what's going on, etc. We're human beings and limited in our energy and abilities. At times like that mixups like this can happen, or the wrong thing can get called out. Sorry to hear it frustrated you, and I can understand this looking particularly objectionable in light of the apparently-minor edit to the question itself — nothing too bad happened here though.

I suggest that in circumstances like this, it's helpful to assume the user was tired and made a mistake or misunderstood something, and investigate with them accordingly (e.g. explain the circumstance and request clarification in comments) before assuming malicious intent. The community members moderating this site are after all generally doing their best to act in good faith — and if they really are acting with malicious intent, it will become clear while you're trying to converse with them under that good-faith assumption. If you suspect foul play or someone overstepping, remember you can also flag for custom moderator attention.

3
Why are the "edit" and "retag" links missing from this post?
10
Is editing a question to remove all content okay?
12
Please stop feeding users editing rep for minor alterations
9
Why was this answer so popular?
1
Why was my question about window shaking in XNA closed?
6
Can this question be salvaged as "good subjective" with proper edits?
0
Is it appropriate to Edit an answer just to improve the answer-er?
5
Should I add notes to my question afterwards?