Hi all. I'm Jin and I'll be working on the designs for the Stack Exchange sites as they graduate from the beta phase. Each site will have its own unique theme that will reflects its topic. However, all sites will share quite a bit of common elements so they feel like they're part of the Stack Exchange family.

After studying the type of questions on the site, I realized that Game Dev is such a broad field! It's more than just programming or graphics. It's a combination of both and so much more. My initial ideas were to have the design mimic the 3d modeling software interface, or programming tool's IDE UI(gray, technical etc). After talking to some friends who work in the industry, they informed me that they actually don't like the UI of their tools. What one friend said really inspired me, to quote him:

Programmers think they are artists and fine craftsmen, and I think that Game Devs are even more so. It’s not a cold, technical job. It’s a vibrant, living work of art.

I visited many game programming and art sites out there for design ideas. Unfortunately, most of them are rather poorly designed php bulletin boards. Luckily, I found some good inspirations in gaming magazines. The design goal is to keep the site structure you're familiar with, but adding a graphical "shell" to it that reflects the vibrancy of game development. The design should be inviting to new users who are interested in Game Dev, and in long term it should fade in the background as a "pleasant noise." 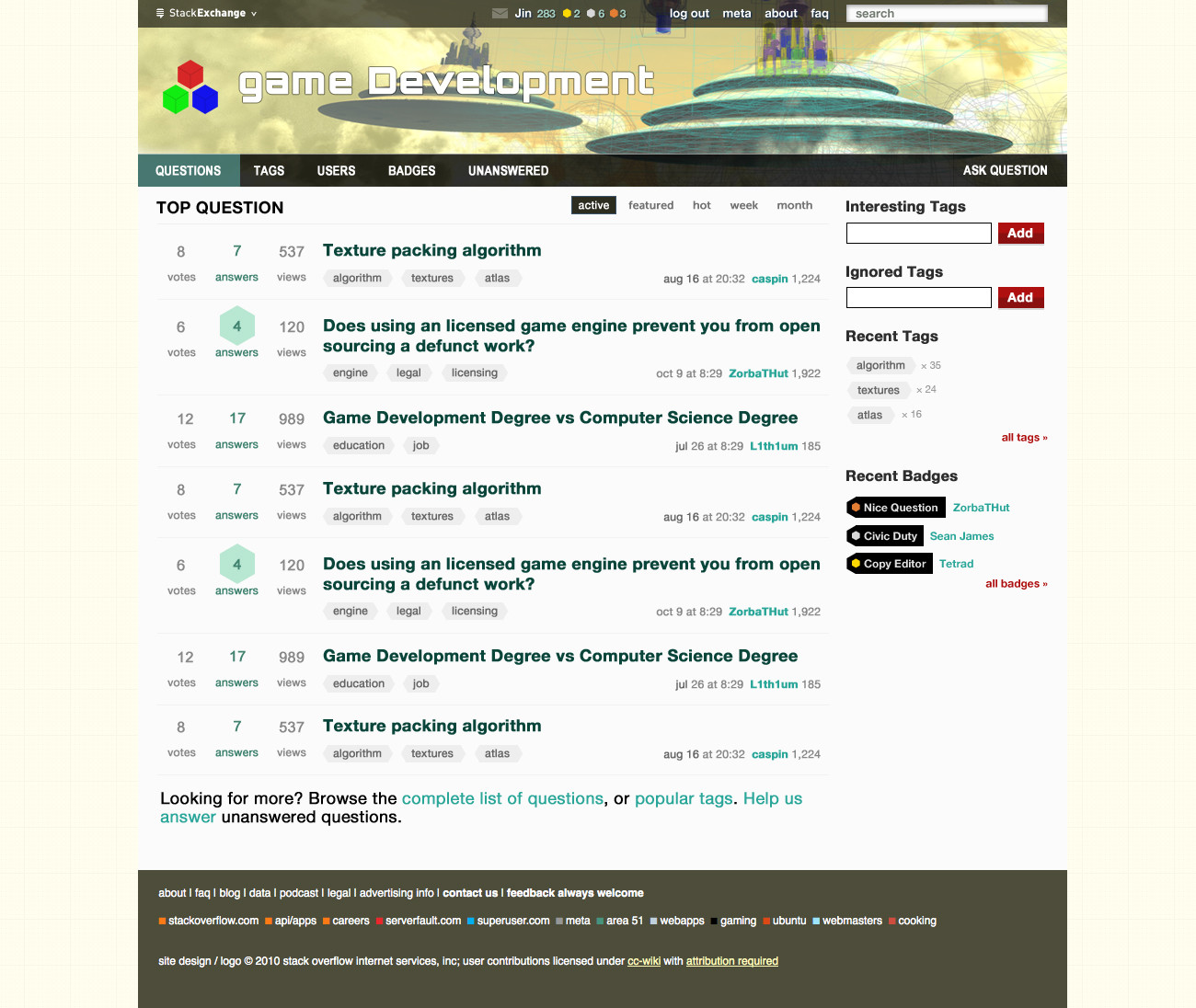 I wanted the header area to be eye-catching, to offset an otherwise rather simple site. I think a CGed graphical header works here. I rendered the scene Cloud City from Bryce. The polygon fading to full render symbolizes conception to delivery.

In the background is a subtle engineering paper pattern. Game dev is just as technical than it is artistic, if not more.

I'm inspired by the logo Sean James came up with. I like the idea of having RGB in the logo, since they're the basic building blocks of anything graphical. Building blocks is the message I'm going after in the logo. I also like the hexgon shapes since they remind me of gaming magazines visuals as long as I can remember. You will see several occurrences of it through out the site. I'm using it on accepted answer background, tags and badges.

I believe this design direction works very well for the Game Dev site. It provides a good balance of eye-candy and content. It adds new elements to the site while keeping the familiar structure. If you have feedbacks on specific details, please let me know!

My only feedback is that I don't think the "Ask question" button is prominent enough. It doesn't really look like a button.

Wow, this is really good.

There is one thing i am concerned about: How do visited links look? On askubuntu they are more eye catching than new links.

I love the design. It is by far my favourite from any of the stackexchange sites. Programmers strive to have a place of their own where they can feel that they're home while working. Now we've been given another such place for when our minds need input from others.

It's very inviting with its cousy and warm feeling.

Looking pretty good! My only comment would be that on my monitor the pink that's being used for 'questions that have your interesting tags' is almost invisible - I have to shift where I'm sitting to see it. Any chance of darkening it a little bit?

I would like that the header area image make people remember games. The image you chose can be a 3d art for any type of application, including games. I just want to make it more specific. You can choose a PacMan-styled theme, or even Mario.

Not the answer you're looking for? Browse other questions tagged discussion stackexchange design .

8
Professional game developers and NDAs
24
Game design questions: should we be more lax with regard to SE's question/answer format?
1
Should this question be reopened as community wiki?
2
Guidelines on asking game industry questions
3
How do we get more professionals on GDSE?
10
Should we better define the scope of GDSE to include graphics programming and image processing questions?
1
How much room is there for "good subjective" on gamedev.stackexchange?
8
Game Development updated site theme is ready for testing!
4
Have we abandoned the rule about generic programming questions?