Too many how to start questions?

Well, lately I have been active on gamedev stackexchange one thing I noticed is that I come by a lot of how to start questions (almost daily). Unfortunately almost all of them are closed being off-topic. I think there's a problem here, since this is clearly a legitimate question and most new people don't really know where to start.

I have a suggestion that new signed up users are asked what level of experience and the reason he/she is coming to stackexchange, for example:

And then depending on his skill level he/she will be guided for existing resources. This way (I think) will:

Do you think this is feasible ?

This sounds great in theory, but it also assumes that users are going to do some research, even if direct links to possibly useful information are provided for them and they don't have to look it up themselves, they still have to read the content.

Truth of the matter is we already do that for them: 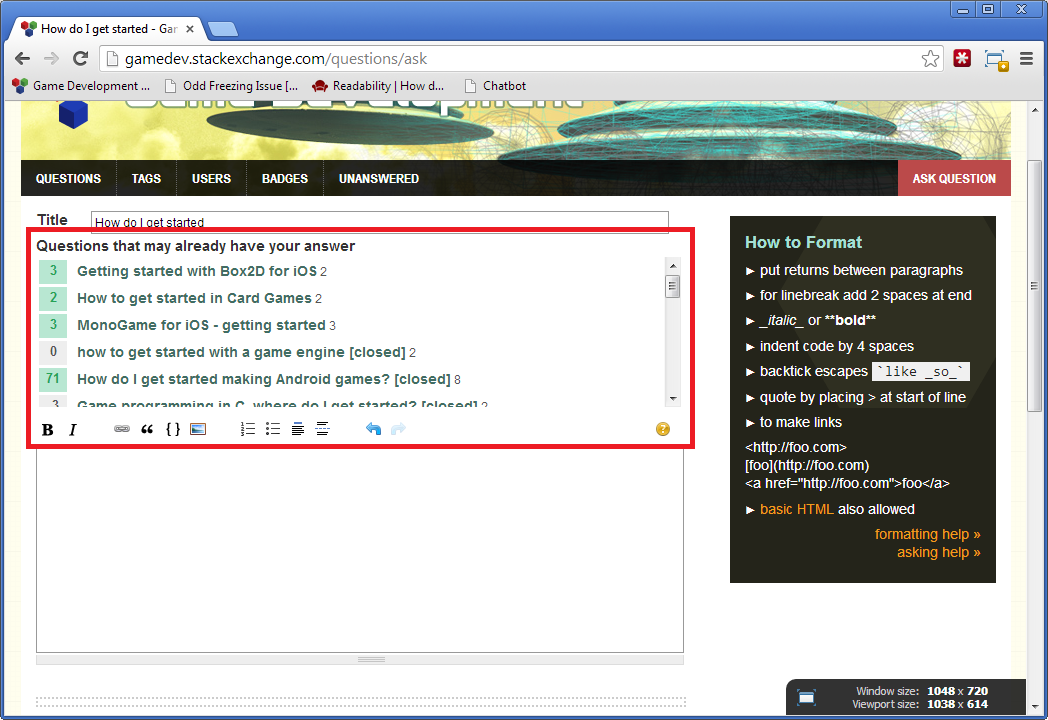 This obviously isn't an answer to the problem as a whole but to answer whether or not I think this is feasible... maybe. Useful? Probably not.

Between the Help Center (especially this question and this question), and the similar questions box when you are asking a question, we've got it covered.

For clarification on why the help center useful, in addition to the guidelines that are really good at explaining what should and should not be on the site, I look to mainly the following section:

Where can I ask subjective, discussion, and other questions not fit for this site?

The problem is all of this requires the user to take the time to actually read content that is put right before them which is really what seems to not be happening.

Do you think this is feasible?

It's not just a matter of the software not supporting it (and there being no precedent for a similar site-specific addition anywhere else on the network), nor just the matter that StackExchange is a Q&A archive (not a tutorial repository for neophytes).

No, mostly the problem is correctly establishing the set of "experience buckets" to put users into and relying on them to correctly self-select. It is extremely difficult, in practice, to accurate define a set of skill level tiers that can reasonably cover the gamut of all users. Your example tiers are woefully underspecified.

Furthermore, people are mostly unskilled and unaware of it, and will tend to misdiagnose their own level of competence in a domain.

Additionally, you have the problem of appropriately cataloguing your suggested "tier-appropriate resources" -- under what criteria is something considered a "good" resource for a beginner-level user? Especially considering that vast majority of users seem to fall into the less-experienced tier, community voting on the content is not likely to be a reasonable approach. And also, who is going to curate the content for "expert" users?

Next, there's the usability problem. As ToddersLegrande points out, users are already ignoring the help center links, information that is designed to guide them right from the start. You could argue that the link is too out-of-the-way, and that by forcing a modal UX in front of them when they first sign up, you'd solve that problem. Unfortunately, users don't read dialog boxes (plus, when you are new or unregistered, the sites already display fairly large banner prompts directing you to information about what the site is about).

Finally, it's not what this site is about. We are not here to be everything to everybody, and one of the things we've decided not to be is a wiki for beginner-level bootstrapping tutorials.

This is a problem that obviously isn't going to go away. As Josh said, people don't read dialog boxes (IME they don't even read "readme"s) so no matter how this information is conveyed during the sign-up process, it's just not going to work.

Maybe it's the case that we're taking the wrong tack here. Closing these questions as off-topic is frustrating for the people doing the closing, as well as annoying for the person who's question is closed. Having to continually redirect people to the usual resources is annoying too.

Maybe if we had one good solid asked-and-answered "how to start" question, with the answer containing the usual links, these questions could more usefully be closed as duplicates of it? The original question would also need to be closed, of course, to prevent that from attracting replies and degenerating into a discussion.

This is coming from the perspective of closing-as-duplicate seeming less of a slap-down to new members, and would reduce the workload involved in pointing new members to the usual resources.

Not the answer you're looking for? Browse other questions tagged feature-request flagging .

-3
getting-started for continuous noob onslaught
14
'Getting started' questions - shouldn't we have something for this?
4
A small idea to prevent new users from posting subjective questions

1
Including “Too Localized” in the what not to ask
4
How to Cite Images
1
How to unvote great comment?
5
Gift reputation to users that need it to join chat
4
Proposal to remove the reputation barrier on chatting in user created chat rooms
2
How to flag for moving to blender.stackexchange.com
0
How to handle questions that ask for tutorials specific to a subject?